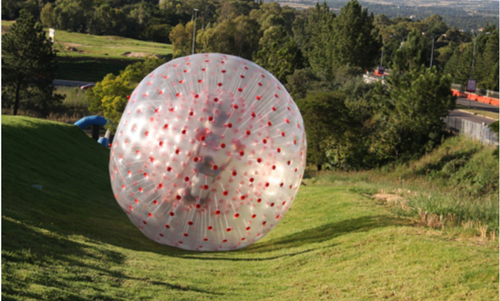 So, what is zorbing? Simply put, it is a sport where someone gets into a big transparent ball that is well secured. The ball is then pushed down a hill or on the ground. There is also zorbing in water which is becoming quite common. Still, there are many interesting things that you should know about zorbing.

Zorbing started at a place called Rotorua in New Zealand. People who love zorbing say that Rotorua has the best zorbing tracks in the world. Many tourists go to the site to engage in some zorbing.

Did you know that there are two types of zorbing? Yes, you can go zorbing either in water or land. Zorbing in water is called hydrozorb, while doing it in dry land is called harnesszorb. Hydrozob has however been very controversial. Experts have raised concern in the fact that there is no escape route as the ball has to be opened by someone on the outside.

With the right precautions, zorbing is actually fun and safe. There are instances when zorbing has been fatal and there are also people who have gotten permanent injuries when things went wrong. Over the years, many organisers of zorbing events have put more safety measures to avoid accidents.

Zorbing is a fun activity that is practised in different parts of the world, including America, Europe and Australia. There are even children balls for a day of family fun.

Before you start zorbing, you must do a lot of research on it. Do not get into a zorbing ball if you have a health condition, especially if you have struggled with breathing problems. You should also start slow, perhaps on flat ground before taking a leap into hills and other slopes.